When I visited The Stampman Challenge Blog today to see what their new challenge would be I discovered that they are actually holding their 3rd Annual Awards. 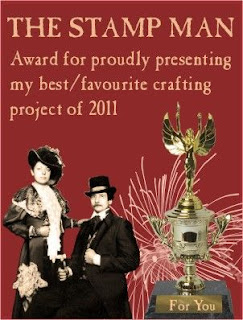 The idea is that everyone shares their favourite project of 2011, and I’ve interpreted that as meaning favourite stamped project, so here I go with mine…………………

Back in June I was looking for ideas for a birthday present for a really special friend and while looking through some old copies of Craft Stamper I came across a five sided Etui with little drawers inside that had been designed by Alix Waterhouse.

It was definitely out of my comfort zone but at the time I was looking to try something a little more challenging than cards or scrapbook layouts and this little box seemed to fit the bill. 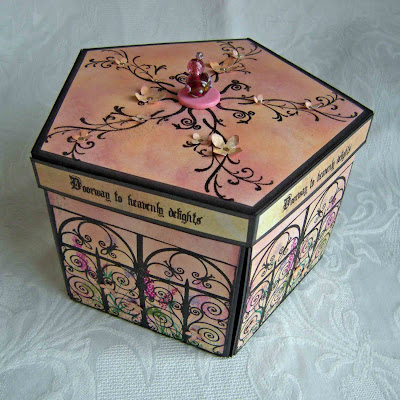 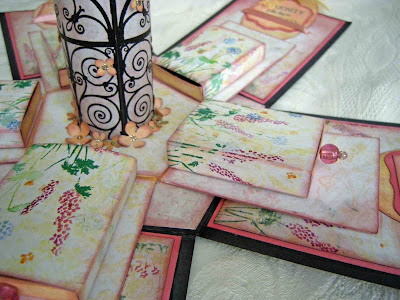 I enjoyed making the first box so much that I decided to make two more for another couple of crafty friends who also had birthdays coming up. 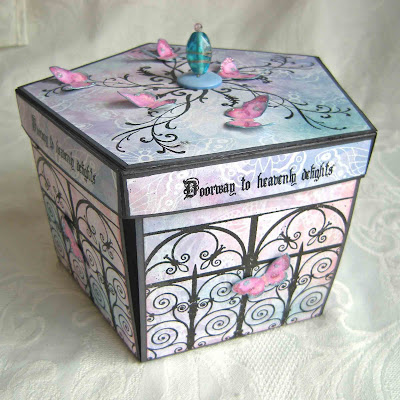 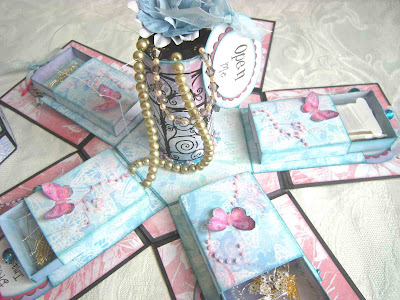 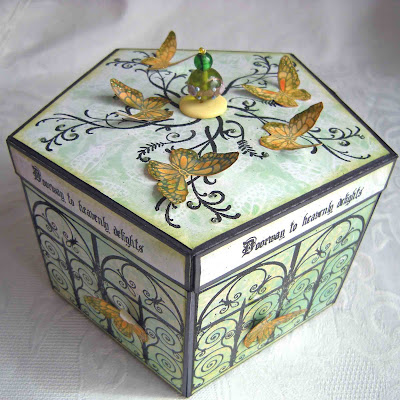 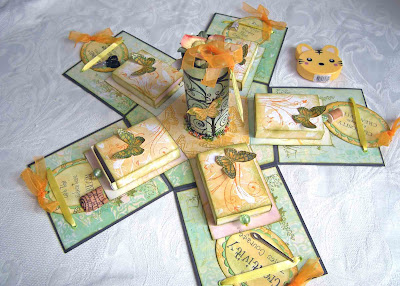 Here’s the original post of the other two and there's more pictures too.

Now, I know this is all supposed to be about stamping but there is one more project that I worked on last year that under other circumstances would have most definitely been my No1 project............nine quilts and eleven cushions, all cross stitched for St. Clare Hospice.


Photos temporarily removed  - submission to The World of Cross Stitching

It was a real labour of love, if ever there was one!


Read the full story and see the rest of the photos here, including the presentation to the Hospice on what would have been my dad's 88th birthday.

Well thanks for stopping by and I hope you enjoyed seeing my favourite projects of 2011………….I wonder what projects next year will bring!
Posted by SueH at 21:52 5 comments:

I’ve got myself so confused with the days this week that I almost forgot to do a picture of my desk today.

I think what confused me was the fact that my Slimming World weigh-in was a day early this week, on Wednesday instead of Thursday and I’m still celebrating that I actually managed to lose half a pound over Christmas……don’t know how that happened because I’ve not stopped eating, Lol!


Any way, it really is Wednesday and that means all the snoops who hang out at Julia’s Stamping Ground each week will be stopping by to see what’s lurking one everyone’s desks. 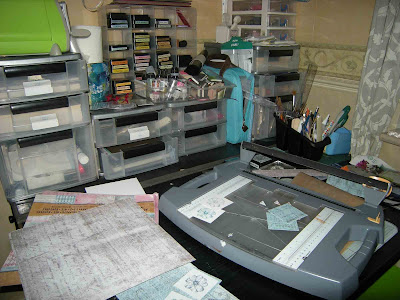 As you can see mine is finally clear of the mess that had accumulated on it over the last week or so and I’m well and truly back in birthday card mode with no less than eleven needed for January. They are all needed in the first week or two so I need to get a wiggle on especially as I’ll also be working on getting the Wedding Invitation order done too so the New Year will be off to a busy start.


I hope you all had a wonderful Christmas and that Santa brought you all lots of “crafty” presents. Mine was very quiet with just my brother and cousin joining me this year but after the last couple of week it’s was nice to just chill out and relax.


New Year’s Eve I’ll be going to my God daughters to ring in the New Year in their first home, which will be quite special.


Thanks for all the lovely messages that you have left for over the last year. Thanks to Julia I have founds some quite wonderful blogging friend who have supported me through some rough times and given me inspirations when it has been lacking.

I hope you all have a Happy and a Healthy New Year. 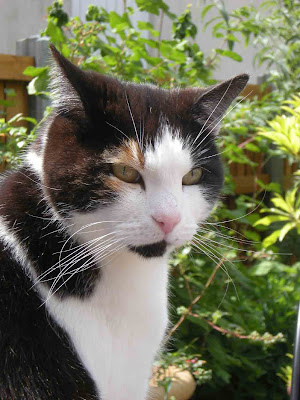 Good morning to all my lovely blog land friends out there…..can you believe that it’s just four more sleeps until the big day.

Things are a little frantic here at Sue’s Krafty Kards the moment while I try to play catch up and I guess are probably the same for you at your end but I truly hope that you’re not trying to get on top of things for the same reasons that I am.


As you may have noticed I’ve not been around since my last blog post when I was telling you I was off to Cologne for the Christmas markets four weeks ago.


Well it all started out wonderfully with a long but enjoyable day on the coach, a slightly choppy channel crossing and a nice five star hotel waiting for us when we arrived.
We were all very tired so it was a quick freshen up and then find somewhere to eat and we found ourselves a very nice Italian restaurant right on the banks of the Rhine. I know……here we are in Germany and we go eat Italian, but we had the rest of the weekend to sample the German cuisine.


We had a little walk round the nearest market before it closed at 10pm and then it was back to the hotel for a night cap and then fall into bed.

Our plans for the following day were to visit all six markets in the area but then everything went pear shaped.


When we woke up on Saturday morning my cousin wasn’t feeling well and it turned out she had had a stroke during the night and ended up at the local hospital.
Her blood pressure was through the roof with both readings being more than 200 and once they managed to bring it down and stabilize her she was moved to another hospital on the outskirts of Cologne where she stayed for the next 16 days.

The rest of the party we were with came home on the Monday as planned, leaving Jane and I out there and I had a bit of a frantic time trying to sort out another hotel so I could stay with her.
I managed to get two extra days in the hotel we were already in and then found another that was nearer to the hospital which was about 20 mins. from the centre of Cologne in a residential arer of the city.
It still meant a couple of moves though because the hotel I found was full on one of the days.........what a nightmere..........talk about panic, especially as hardly anyone in the area spoke English and we didn't speak any German.
The guy in the hotel was really helpful though and he found me a room for the one night I needed and then it was back to his hotel for the rest of my stay.

I was beginning to think we wouldn’t be home for Christmas but fortunately it’s turned out to be only a mild stroke and Jane is making good progress, but still scary never the less and I’ve never looked forward to coming home from a break away more than this time.


The main thing is that she’s going to be ok, but having completely lost the last week of November and the first two weeks in December all our plans are now three weeks behind.

There’s still Christmas shopping to do and I hadn’t finished making all my Christmas cards so for the first time in eight years or more I’ve sent brought ones and decided to keep the ones I’ve already made for next year because I couldn’t decide who should have handmade and who the brought ones.

So it’s onto my desk and as you can see there’s absolutely nothing going on. 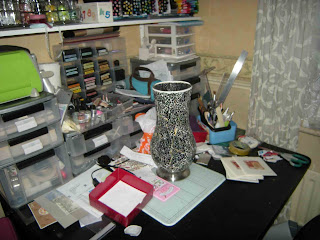 The remainders of the brought Christmas cards are sitting there just in case I’ve forgotten someone.

The lamp was moved from the living room when I put up my Christmas tree yesterday and has just been dumped on the table for the time being until I get around to tiding up and the other bits and bobs have been on the table since before I went away.


My craft room does have a Christmassy feel thought because I’ve plugged in my little tree to give some festive colour. 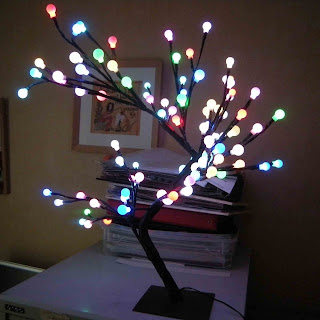 And here’s a picture of my tree in the living room. 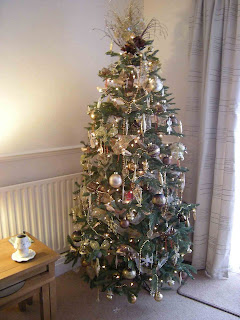 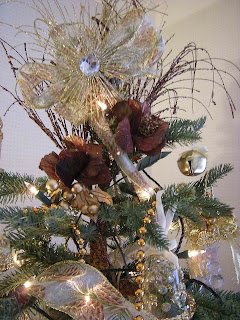 I wish each and everyone of you who joins Julia for What’s On Your Workdesk Wednesday each week a very Happy Christmas and I hope Santa brings you everything that you hope for.

Now let’s see what’s on your desk this week!

Thanks for stopping by.