It’s hard to believe that it’s New year’s Eve. This year has just flown by in a flash.

I thought I would end the year as I mean to start the new one……..by taking part in this weeks dare set by the team over at Daring Cardmakers

Team dare year end....4 of the best
Hi All. Today we have decided to revisit your most favorite dares of 2007. The four top dares, decided by the number of comments you made on them are (in no particular order): 'buttons', 'ribbons', ...'and cut' and 'frames'. We would like you to use this week as many of those dares as you like to make your card in any theme and any style.
I’ve managed two cards for this one, the first of which uses my Tapestry Stamps. 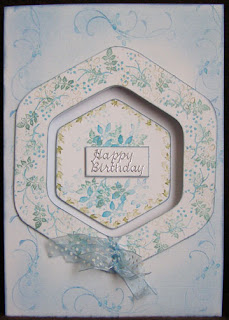 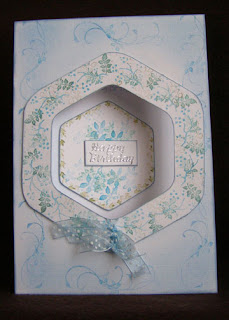 I started off by chalking the white card in two shades of Blue and then used a Tapestry Border Stamp and flowers from the ‘Garden Veranda’ set (SFL 34052) to make the background.
I cut the aperture, a frame and a tile using the Creative Memories Cutting System and decorated the frame and tile with the same set of stamps.
I then finished off the card by attaching the frame to the outside of the card around the aperture and the tile to the inside of the card using 3D foam and added the ribbon.


The inspiration for the second card came after seeing a project in a recent copy of PaperCraft inspirations. 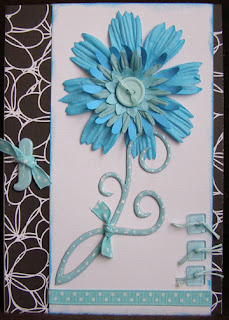 Their card used one flower and wire but I decided it would look nice using layered blooms and a painted chipboard flourish. I also added a Chipboard initial, buttons and ribbon.

Now, I was going to tell you about the strange experience I had while walking around the Christmas market in Frankfurt, wasn’t I.

My cousin Jane and I were walking round the market when we came across a stall which was selling ceramic cats and there on the table were several Black, White and Ginger ones just like my BoJangles. Bo himself is a pretty special cat because approximately only 1 in 4000 Tortoiseshells are male and because of his Ginger patch that technically makes him a tortoiseshell. 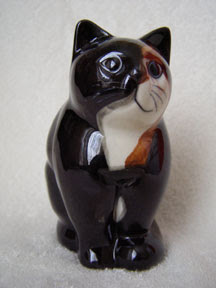 People who know me will already know that before I got BO I was ‘mum’ to a very sweet little tabby cat called Emily but sadly she developed Diabetes and had to be put to sleep. I was totally devastated and felt I had let her down by making that decision and it was almost a year before I could bring myself to visit the cat sanctuary and give a home to another cat.
Anyway, there I was, standing in the market holding this Black, White and Ginger ceramic cat when I turn it over to see how much it was and I started to cry. There on the bottom was the cats name…..EMILY. 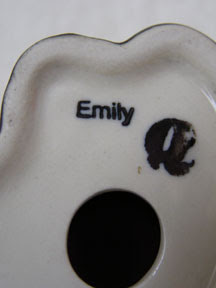 Jane started to lift all the other cats to see if it was the name of the artist but no, it was the name of the cat and every single one was different.
There were several with the same markings, but this was the first and only one that picked up. It makes me shiver just thinking about it but it was as if Emily was trying to tell me she was still with me, watching me and that some how she approved of Bo.

How could I not buy it after that!
It now sits in pride of place on the shelf right under the cross stitch of Emily that I stitched.
Posted by SueH at 13:04 9 comments:

Where did December go?

I can’t believe that it’s been over a month since I last blogged and I feel so naughty for not having taken part in any of the dares and things that were going on.
I’ve just not found the time for ‘fun’ crafting.
I had loads of Christmas card orders and also some birthday cards that I needed to make without all the other Christmas preparations and I also had a little short break to Germany for the Christmas markets so there was simply no time to play.

Our trip to Germany was organised by Alex, an old work colleague of mine. He organizes a trip every year but I’ve only been once before and we went to Cologne on that occasion.
This time we were heading for Wiesbaden, so at 6am on a VERY WINDY Friday morning a full coach load of us set off . Unfortunately our journey was made longer because they had to close the Dartford river crossing due to the bad weather. We sat there in a queue of traffic for over half an hour without moving an inch. The ferries were also running late due to the bad weather conditions and we had a rather choppy crossing to say the least. All in all it turned out to be a very long day, but we eventually arrived at the hotel at around 8pm. 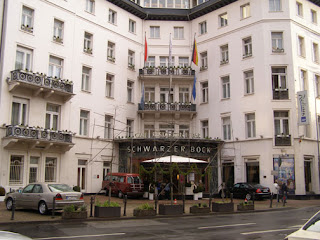 It was a really lovely hotel and very old apparently.
In the foyer we were greeted by the largest Gingerbread house I have ever seen. It must have been at least two feet high and was covered with lots of iced cookies but what made it very special was that every morning there would be a little try of cookies or Stollen placed at the front of it for you to help yourself…..how nice was that! 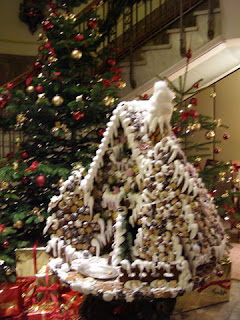 (sorry it's a bit out of focus)

Our first evening was spent exploring Wiesbaden’s own little Christmas market and ice rink and then finding something to eat and a nice warming cup of gluevine to drink.
On Saturday we spent the day at the much larger market in Frankfurt. I had a bit of a strange experience here, something which made me cry but I will tell you more about tomorrow . 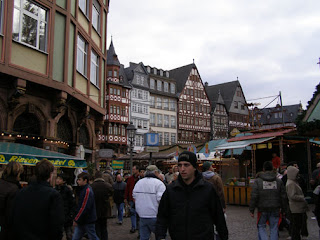 Then on Sunday we were taken out to the much prettier town of Rüdesheim. 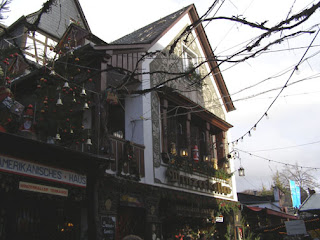 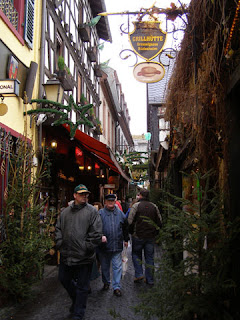 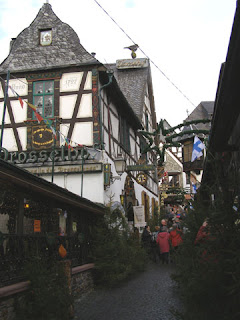 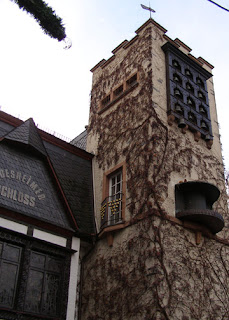 It seemed that no sooner had we got there, the weekend was over and we had to face the long journey home again. It was still 'very' windy and we were told there were force 8 gales in the English Channel so to take our minds off it we decided to treat ourselves to a meal in the Langham's Brasserie on board the boat........very nice!

All in all it was a fantastic weekend and I really do hope to go back one day because there’s so much to see there.

Anyway, I just thought I would pop in and let you all know that I’m still in the land of the living despite the lack of crafting.

These last couple of pictures are of Bo sporting his Red Christmas Day bow and playing with the toys that were in his Christmas stocking. 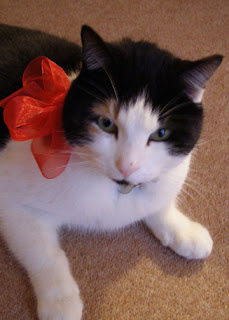 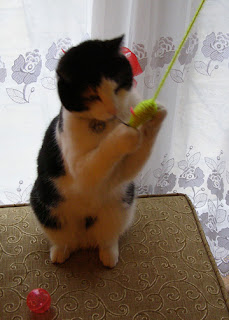 Hope you all have a fantastic Christmas.
Posted by SueH at 16:24 No comments: