Happy New Year to you all.

So here we all are in 2013 and I hope all my fellow WOYWW’ers from over at The Stamping Ground are fighting fit after the revelry of your New Year’s celebrations and are ready for another year of reveling what’s lurking on your work space.

I myself had a rather quiet Christmas but made up for it New Year’s Eve, when eight of us booked into a local hotel. We spent the afternoon enjoying the use of their pool and Jacuzzi and then it was a snack and drinkies in the bar before getting ready for a five course meal later in the evening and then partying until 1.30 in the morning. I’ve not done that for many, many years and the old body is still protesting about all the exercise it was put through….don’t know where I ache most, Lol, but we had a fantastic time.


Now, knowing that I’ve decided to step back from the card making a bit in 2013, I didn’t ask Santa for any new stash., but my table does have something new on it.

I mentioned a while back that seeing everyone’s knitting popping up everywhere was giving me itchy fingers again, not that I’ve knitted in over twenty years, and I began to think it might be nice to have a bit on the go myself.

But what to knit?

The answer to that came just before Christmas when news of a new baby reached my ears….can’t say to much about it at the moment because she hasn’t announced it to everyone yet, but it was my excuse to get the needled clicking. 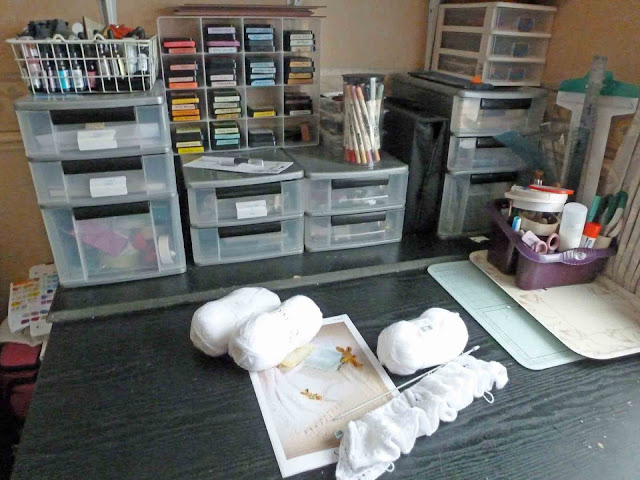 and I’m knitting a 3ply shawl……….that should keep me quite for a little while! 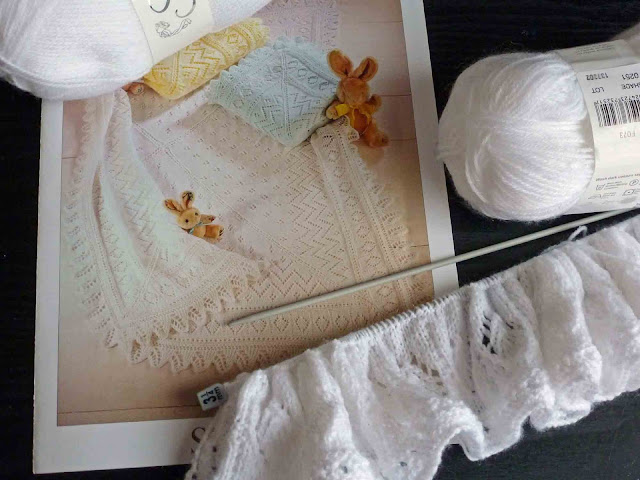 Despite not asking Santa for any paper craft stash he did actually did fetch me something crafty after all. This lovely lot…….. 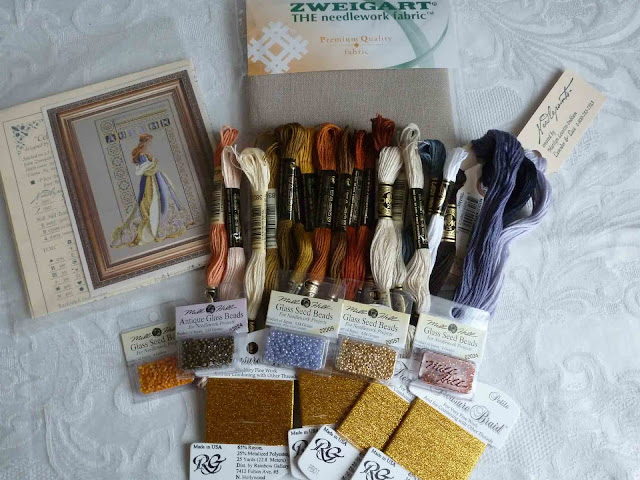 This will be my next large cross stitch project and she’ll be my fourth of the Celtic Ladies, Celtic Autumn. 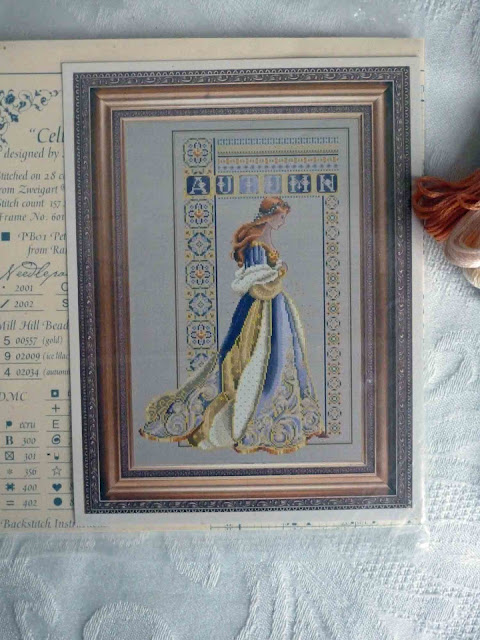 There are still a few of the Needlepaints and silks to come because I’m guessing Santa didn’t have room on his sleigh for them but I have everything else I need to get started on it as soon as I finish the Sampler which is coming along nicely.  Ive stitched quite a bit more than when that picture was taken.  The whole botton is done now and I'm working on the top left-hand quater.


Well, that’s all there is to see on your first visit in 2013 to my work desk.
I’ll be along in the next few days to see what you’re up to but I doubt it will be tomorrow as I’m off to the pictures to see The Hobbit.

Love the look of your new crafty makes Sue. That shawl is def a labour of love...well done you.
Hope you have a wonderful New Year with everything that makes you happy.
Hugs,
A x #26

That's fgunny I have an inkling I'd like to get back to knitting, too. I think it's because my mum made all the children beautiful Fair Isle Christmas jumpers and they loved them. Your shawl looks beautiful. Happy Wednesday and Happy New Year.
Sue x (MiniOwner@68)

Well that little lot is going to keep you occupied for a while!!! I have actually done that shawl pattern, believe it or not! It's not oo bad, is it and after a while the pattern gets stuck in your head and you can just do it whilst watching tv! And that cross stitch is gorgeous, how long do you think it will take you to complete it? I was out partying on New Years Eve too and I felt hungover next morning...and I hadn't even been drinking! Age....tsk tsk....
Happy New year, Sue. May it be a corker :)
LLJ 31 xxxx

Good luck with the knitting - I haven't done any for probably as long as you, not sure mine would be so neat after all this time!! That cross stitch kit is beautiful, what a lovely picture it will make. Helen, 4

It's lovely to see you, Sue and a very Happy New Year. Your New Years Eve sounds perfect. I would love to do something like that but with children it's not really possible at the minute. We had a lovely noisy Christmas but very quiet New Year.
I love the fact that you've started something new for the New Year and that shawl looks gorgeous. It'll become an heirloom I'm sure. My MIL knits a lot and her favourite things are baby shawls. I still have the one she made for DD when she was born although it was very well used.
Love your x stitch too. I have that kit, it's my favourite of the Celtic ladies. I think it's the colours. I shall enjoy watching your progress with her.
Happy WOYWW
hugs Lisax #65

Sue--are you kidding me? Knitting AND cross-stitch? I am all about that! Your shawl has such a pretty lace look to it and the white is so perfect--and those Celtic ladies are gorgeous. I love your new set of DMC you received. (I am a proclaimed floss-aholic) You have really nice storage too--looks wonderful. Happy WOYWW! Sandy Leigh #63

Hi Sue - glad you had a fun New Year's Eve - great to let your hair down now and again!! Your knitting looks lovely - definitely in at the deep end!! Your embroidery threads etc - my idea of a perfect gift - enjoy using them. Happy New Year! x Jo

Wow, you are so patient and clever! the shawl is already looking gorgeous, I must say when I. Had my baby it was a really useful ad beautiful gift, great choice!

Ooh Sue, I'm shocked to hear that you're scaling back on your paper crafting a bit!! What will you be doing instead? Obviously you're starting with knitting and then that lovely cross stitch picture too, but no cards, lol!! I'd like to learn a bit more on the knitting front too, especially a simple lace pattern or a very simple cable to start with. Whatever you decide to do, I hope you have a very happy and healthy 2013.

Congrats on the new addition. I'm sure the shawl will be lovely and much appreciated. I'm looking forward to seeing the progress on the Celtic lady.
April #133