Back in the School Yard

.Well the weeks are just flying by and I can’t believe that we are just two days away from the end of January already. Mind you, it really feels like we’ve had a Winter this year, what with all the snow and stuff and I’m just longing for some nice, slightly warmer days so I can get out in the garden and clear away some of the dead plants and empty my hanging baskets ready to take the nursery to be refilled.

I’ve kept myself busy this week despite the fact there’s not been much crafting going on.

Now don’t ask what possessed me because I had no plans what so ever to do it but suddenly on Saturday morning I decided it was time for a freshen up, so it was off to Homebase for supplies.
I’ve virtually finished now, just a couple of final things and then I can get straight in there ………Oh how I hate being in a mess!

In between the decorating I did find the time to make one card this week and that was for today’s dare over at the Daring Cardmakers.

Keryn has set the dare and she got me thinking about my own school days because she wants us to make a card with a school theme.

If I’m honest, I found school quite hard.
I was very slow at reading and spelling and was always behind the rest of the class but I did do better in the practical things like cooking and art……… now there’s a surprise!

Math’s scared the hell out of me too but I loved Geometry lessons where I could play with shapes and it was my old Geometry Set that gave me the inspiration for my card this week.
. 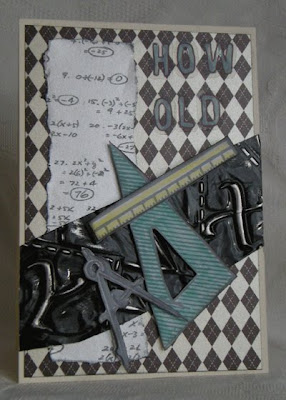 .I covered the card with patterned paper and then found a picture of some Algebra, which I printed out, tore and inked the edges and stuck it over the top, to one side. On the other side I’ve used some Tropical Alphabet Stickers from Mustard Moon for the sentiment.

Next I embossed a piece of Ten Second Studio Black metal using a couple of the templates from my prize last year and then sanded across the top so that the Silver shows through.

Last but not least I found some Clip Art of a set square, compass and a ruler which I’ve coloured with Marvey Le Plume Pens and decoupage them over the top of the metal panel.
. 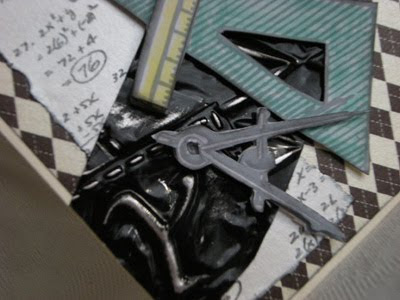 .Now I was going to say that I’ve managed a card with no faux stitching on but then I realized that the embossing on the metal looks like stitching so as my report card used to say….

Must Try Harder Next Time. Lol!

Hi Sue - this is a brilliant card and just perfect for the older boys! I don't know what I'd have done without the old Clip Art lol.

This is soooo clever, Sue. I love to see the way you put your cards together, I always feel I've learned something from the techniques you use. We're definitely a "Clipart" Team this week!

Clip At - how amazing! (See I didn't think about it at all) I was wondering how you had done that fab geometry set!