That’s exactly what it’s been like for me over the last few weeks. One week I manage to hop around the desks of the world for What’s On Your Workdesk Wednesday, and the next week I don’t make it, as happened last week, but I guess that’s the way it goes sometimes.

An added distraction to my crafting time of late has been the coverage of the Olympics and I’m ashamed to say that I’ve spent way too much time in front of the TV cheering on team GB, but haven’t they done well!

The support for the athletes has been phenomenal. Add to that the nail biting finishes we’ve witnessed, the elation of the winners and the total devastation felt by those who didn’t achieve what they had hoped for, it’s been such an emotional rollercoaster.
I’m so proud of our team because they have most definitely put the ‘Great’ back into Britain and it’s not over yet, we still have four more days and the Paralympics as well……..I can’t wait!


So, as I said, I’ve been distracted a lot this week so there’s not very much to show you on my desk except for the usual mess that I seem to always work in. 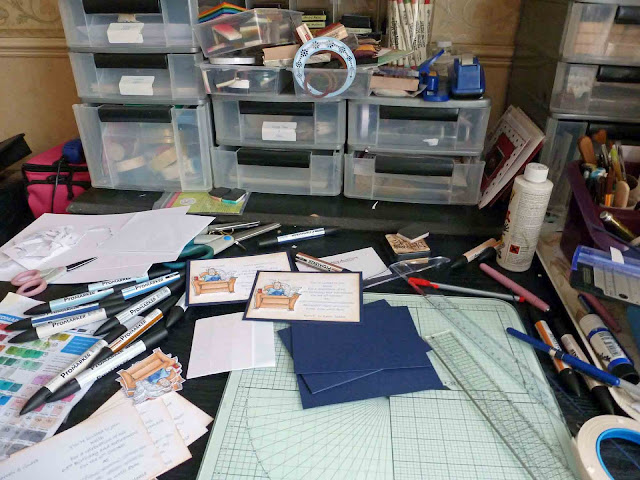 It’s scary to think that my brother reaches retirement age in October and it’s starting to hit home that we are the ‘older’ generation, now that my mum and dad are gone and most of my aunts and uncles too.

We are planning a little family get together and I’ve been making a few invitations for him to take in to his work mates, so it was out with the old Promarkers and a digi stamp that came from Mo’s Digtial Pencil, my favourite digital stamp shop. 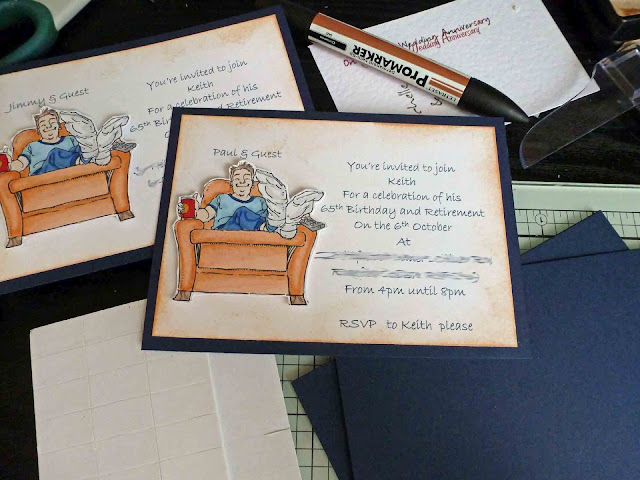 I promise you that the writing on them isn’t all smudged as it appears in the picture. I had to take precautions because I as much as I would have loved for you to all turn up on the day to join us I don’t think my brother’s house would hold everybody, Lol.

Oh, and before I go, can I just thank Trish again.
I am the very lucky winner of the fab candy that she offered last month
which you can see Here            Thanks again Trish.

So, that’s it for another week.
I’ll be calling in later to see what you’re all up to, so get the kettle on……It’s Black Coffee, No sugar for me!

Fab cards Sue. Think we have all been enjoying the Olympics way too much over the last 2 weeks so don't think you're alone there :-) Hasn't it been amazing?
Hugs,
A x #6

We all have been in the same boat, but your desk is a good mess! Fracnesca #32

what a shame! i thought we'll all be invited :) *hehe*
keep enjoying these games - i certainly am!!
happy WOYWW!!
no. 11

Those invites are fabulous.

Love the invitations. Just remember that you're just as young as you feel (although I have to confess that I sometimes feel older - in my body, not my mind!). Thanks for sharing your workspace. Hope you have a good week. Hazel WOYWW #99 x

I've been watching the Olympics most evenings. Although I wasn't much into the track and field events. They have been exciting and fun to watch. I've even been cheering for GB too.

Your brother's retirement invitations look great. The font you used is one of my favorites (although I can't remember the name of it).

Today is my one year anniversary so I'm taking a survey on one item of candy -- check it out and put in your 2 cents!

Great invites. Yes it seems weird to realise we are the older generation. It's exhausting keeping up with all this sport - it was hockey and volleyball today and I still have sand in my bikini -lol. x Jo

I too think the Olympics have really put the Great back into Britain and given the whole country a well needed boost. patriotism rules! It has all been soooo exciting.
I think I'd better come along to Bojangles Mansion and sort out that desk!
Great invites for the celebration!
Love joZarty x

Great cards you are working on there. Love your space. Glenda 55

might be the older... but much wiser love your card have a great day

Love those cards Sue that's a really great image. Pity we're not invited!! Been trying to keep up with the Olympics, I have the BBC News website open to see the results and photos etc, managed to see a bit of the equestrian the other night but not much else to be honest!

I love those invitations - lol, they're so funny and just right!!
I have been glued to the box as well!! Think we're all going to get Olympic Withdrawal Symptoms afterwards....
Hugs, LLJ #13 xx

Mo is my favourite digi artist too! I just love all her work.
Those invites are really super.
I must admit I spent far too much time watching the Olympics too.
Happy very belated WOYWW

I love these invitations! This is one of my most favorite of Mo's images! Wonderful project! Wishing you well.