I know that everyone says how quickly Wednesdays seem to come around but what I’d like to know is what happened to January?

Can you really believe that here we are - the first day of February and up until yesterday afternoon when the temperature dropped and there was a sprinkling of White stuff (sleet rather than snow) we hadn’t even seen a sign of winter down in the South East.

So now the heating has gone up a notch and I’ve put another layer on because sitting beside the window crafting can be a little chilly sometimes.

And talking of crafting, it’s time to show you what’s lurking on my desk this week. 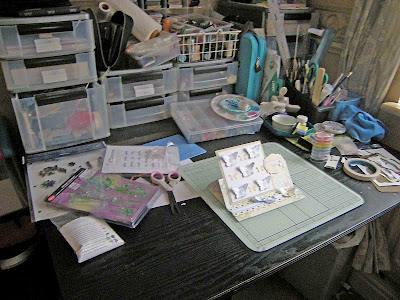 Looking at the picture, I’ve just noticed that I’ve had a definite ‘push to the Right’ without even realizing it, Lol!


I’ve just finished the card I was working on and all the bits and pieces I’ve used are still out, including the two sets of stamps that I brought when I went to visit Lythan a couple of weeks ago.

The Green set you can see are My Paper World (Grasses and Embellishments) and were just £4.99. I couldn’t believe how cheap there were but they were a bit of pain to get off the backing sheet the first time I used them and I was a bit frightened to pull too hard in case they snapped. Does anyone else have that problem with their Silicone stamps?

The second set were a real find too.

They are a lovely set of Technique Tuesdays ‘Botanika’ stamps that usually retail at £16.50 but because a couple of the stamps had been used in one of the shops workshops, they had been reduced to just £5.         Oh how I love bargains like that!


The rest of the mess on the table includes nesties, inks, embossing powder, gems, paints, card Candi and more stamps, all I used on the card for Flutterby Wednesday where we had to use Butterflies........think I managed that one..........just!

The inspiration came from a card designed by Glenda Waterworth in the April issue of Craft Stamper last year and uses the free ‘Chocolate Baroque’ butterfly stamp that came with it. 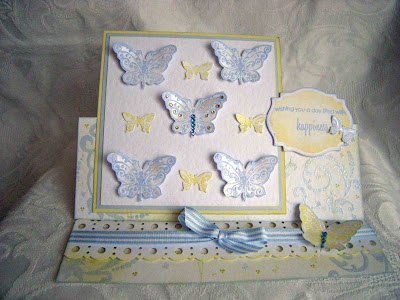 Unlike the card in the magazine, I’ve made mine an easel card and inked and stamped directly onto the card using the two new sets mentioned above and a couple of peg stamps from my Tiny Grape and Holly Border Tapestry Stamp set. The greeting is from Imagine That’s Mix and Match Sentiments set.


To add a little bit of interest to the butterflies, I clear embossed them before painting them all with Perfect Pearls and Pearl Ex-Press paints and then added some tiny gems to the body and wings on a couple of them. 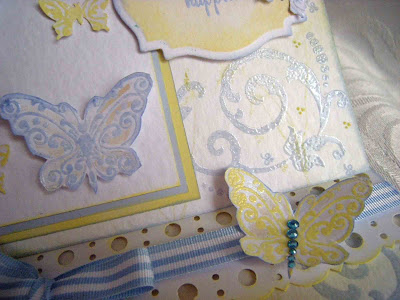 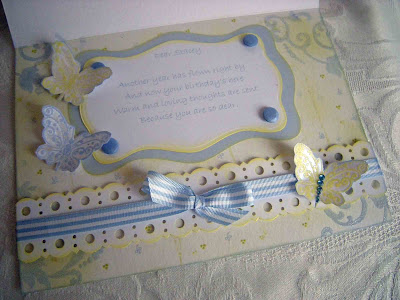 So that’s my desk for this week.

If you want to join in with the desk hopping, call in on  Julia, at The Stamping Ground   where you’ll find all you need to know to participate.

Thanks to everyone who left me comments last week. I know how hard it is to get around to everybody each week so I really do appreciate you taking the time to stop by.

And a special thank you to  Dotty   who not only stopped by last week but also left me this blog award.

Apparently the idea of this award is to get blogs that has less than 200 followers noticed by a few more people. Not sure if it will work but I like the concept and am happy to pass it on to others who have most definitely inspired me since I started blogging.

1. Show your thanks to the blogger who gave you the award by linking back to them…………….Done.

2. Reveal your five picks for the award and let them know………….Done and in the process of doing that.

Angie over at Shozzys Place
It was Angie that got me back working on my heritage Album. Her own pages are beautiful and full of family history that will never be lost.

Lisa from Lisa’s Craft Garden
I’ve chosen Lisa because her stamping is amazing, as is her painting. I really wish I could paint Sweet Peas the way she does.

Lythan from Slightly Squiffy
She chose that blog name because she recons that her work is always slightly squiffy.
I say…never in a million years.
Lythan’s creations are always an inspiration and she produces the most beautiful LO’s I’ve ever seen. She’s a bestest friend to boot and I’m really going to miss our play days when she moves.

Jan from Lunch Lady Jan’s Fabric Frenzy
I’ve nominated Jan because I’m envious of her sewing skills.
What she turns out on that sewing machine of hers just amazes me because I can’t sew a straight line to save my life.
She makes beautiful creations week after week for us to feast our eye’s on.


My last nomination for the Liebster Blog award is a bit of cheat really because I’m linking to two people. I really couldn’t do one without the other because they are the Sisters of Crafty Creations, better known as

Annie from a Stitch in Time and  Twiglet
Both are amazing crafters whether it be sewing, knitting, embroidery…if it’s done with a needle, you name it and they’ll have done it.
But what’s really inspirers me about these two lovely ladies is that despite all the trials and tribulations they’ve went through their selves last year, they were still there to offer encouragement and support to everyone else…..and make, I don’t know how many, little dressed for the African children…..now that’s what I call dedication to a charity project…..well done girls!


4. Bask in the love from the most supportive people on the blogshare-other bloggers......… I'll try and do that.


Ok then, that really is it from me for today.

I’m off to hit the shops and have a spot of lunch with a friend now, so I’ll see you all later.

Thanks so much for the lovely things you say about us. You are so kind.
I'm just doing a quick dash round to see what everyone is up to this week before my daughter comes out with the twins. We are doing a fitting for her Wedding dress and making a start with the Wedding invites....I can see a busy day ahead of me :-)
Hugs,
A x

thanks for the lovely words Sue - and for the award. I'll have to think hard who to give it to!

Aww thanks, Sue!! I'm really chuffed that you've nominated me for the award - my first ever!! Like Lythan, I'm going to have to think of my five favs now, what fun! :)
Beautiful butterfly card on your desk today, they look like they're going to fly away. I love anything to do with butterflies but that is particularly pretty!
Hugs (and thanks once again!)
LLJ #68 xx

I'm basking now, Sue!!! What a lovely thing to say. I shall wear my award with pride.
Happy WOYWW
Hugs Lisax

WOW your card is stunning and the colours are so pretty :) Congrats on your award.

Thanks lots Sue! You are so kind and thoughtful to share the award with us two crafty sisters. Your butterfly easel card is just gorgeous - Annie and Shell are busy with butterflies today!! Hope you enjoyed your day. x Jo

well done! both on the award, and giving it to others, xx
lovely creative area, xx Happy WOYWW hun, hoping to get to post on blogs this week, as it didnt let me last week!!

oh wow Sue!! Your easel butterfly creation sure is stunning!! Thanks for sharing hun! :)

WOW that card is gorgeous, the little butterflies are so sweet, really beautiful, a great crafty bargain found well done you, Hope you have a great week Lou @26

Definitely s shove it to one side going on there Sue! Lovely card, butterflies seem to be the in thing right now don't they? I keep seeing them everywhere. I have a couple of stamps that are hard to get off their backing sheet too, most frustrating!

beautiful butterfly card! I love your desk with its push to the right this week! I am offering up some blog candy so come leave a comment on my blog and get a chance to win! Thanks for sharing and have a great week. Vickie #90

Thank you so much for the award ...I shall get that organized to pass on over the next few weeks ...you kind words were appreciated.
Love your card ...so much work has been put into it yet it has a simple elegance ... iyswim. Gtreat bargain with the stamps ...who cares if its been used, at that price.

Love your card...I have never tried an easel card...they look difficult to make but gorgeous to look at.

That was a great bargain on the stamps...good for you for spying that.

Love the butterfly card, those soft colors are perfect for each other! waving hi from the hills of NC :)

Beautiful card, the butterflies are majestic looking!
Doing the woyww rounds, looks like it's gonna take a while!

I love love love the card! The butterflies are awesome!

Thanks for stopping by my blog! I'm sorry to be getting around so late this week, a stomach virus had me knocked out for a few days :(

Very elegant card, Sue! Love that you added some dimension to the butterflies! Thanks for joining us at Flutter By Wednesday!

Thanks for stopping by my blog, what pretty butterflies on your cards. Happy weekend!
Barb

Hi there Sue, a lovely card and space and congrats on the award too! thanks so much for popping over, and for sharing. Happy WOYWW! Shaz in Oz. x #21

Vickie @ In My Head Studios said...

This is a beautiful card! I love how much detail it has! xoxo