I managed to miss my usual WOYWW (#141) post over at The Stamping Ground this week, so I thought I would do a little up date this morning instead, just in case you missed me.

It’s been a bit of a rollercoaster of a week really with so many ups and downs I can’t tell you, but today things seem to have settled down again and I really hope it stays that way.

After I left you last week I finished off the frog card that I had started.
I had only just started to stitch the frogs when I showed you and had no idea what I was going to do with them. In the end I settled for a diagonal easel card and then promptly creased the darn thing the wrong way, so I ended up with a card that opens on the Left rather than the Right.


Here’s the finished card, which I’m entering into the challenge over at Truly Scrumptious
this week, where the theme is All Creatures Great and Small. 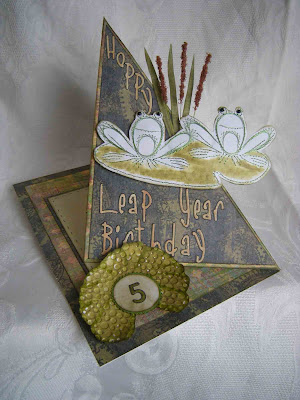 I did have fun finishing it off.


The bull rushes were made by covering wire with glue and dipping them in Brown Flower Soft and I did toy with the idea of adding some glitter too but didn’t want to overdo it. 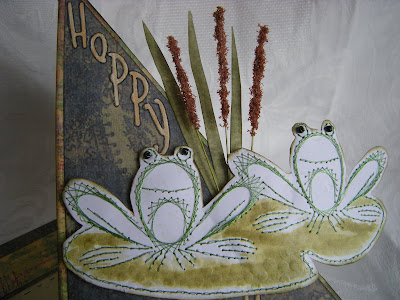 I was really pleased with my Lily Pads too because they look like they have water droplets all over them. 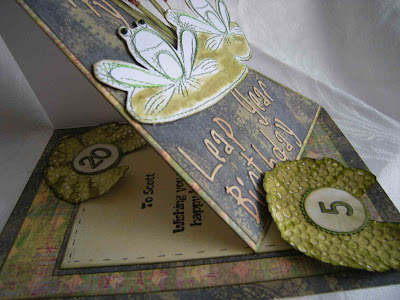 Now Saturday was definitely one of the down days on my roller coaster ride, not so much for me but for my 80 year old neighbour.
Poor Pat came knocking at my door at 2.15 in the afternoon all in a panic because she had water coming from her loft. When I got over there her hall, bathroom, and second bedroom were awash and the carpets in the lounge and main bedroom had just caught on the edges but the water was still poring for the celling . She had two burst pipes and I was there with her helping to clean up until turned 8pm.

Sunday and Monday were ok but Tuesday started as a down day because I had to go to the dentist………..to say I’m terrified is an understatement. Then it was a good day because apart from a quick clean everything was ok....(breaths sigh of relief)

Wednesday was an up day.
Went to see the nurse for a BP check and it was 124 / 76…..perfect.....…but then took a real plunge because in the evening as I was eating my diner I broke a tooth after getting the all clear the day before.

Thursday was definitely a down day.
Went to Slimming World in the morning and only lost ½ lb this week and was really disappointed. The bigger picture is all good thought because I’ve now lost 1st 3lb. Then it took another downward plunge when I had to go back to the dentist to get my tooth fixed.

So now you know why I need a nice calm and quiet weekend.


I did manage to make a couple more cards but I'll put them in a different post because this one is turning into an epic.

Beautiful card,lovely image and colours....Thanks for sharing with us at Truly Scrumptious,hope to see you next time...
Mandy x

Oh my gosh! There are those frogs were were on about last week. Thanks for sharing the finished product. They are quite adorable.

Oh Sue, this is stunning, well done you on something so inventive and so stylish.