With only a week to go until the big day and excitement is reaching fever pitch over at the Julia’s place where the Stamping Ground is a buzz with anticipation for the 2nd birthday Pay It Forward.
My gift is all done and dusted, ready and waiting to go in the post but I still need to make a little card to go with it, so that’s part of my plans for today’s crafting action.

But before I start on that, I have to pack up some cards to go into the post and as you can see from my desk photo this morning BoJangles is sitting pretty waiting help me.........ok, he’s really waiting for me to take that coffee cup out into the kitchen and hoping that while I’m there he’ll get a handful of food.
He’s such a gannet! 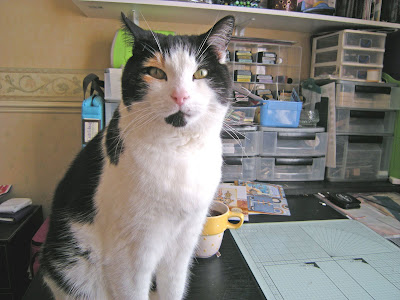 As I understand it, for most cats ,including my previous cat Emily, you can put down a big bowl of food and they will quite happily graze on it all day but not Bo, oooh noooo, he scoffs the lot in one go and still wants more. He’ll eat and eat until he makes himself sick, so I have to weigh out his food in the morning and give it to him throughout the day in a bid to keep him happy, but his constant worrying for food can really try your patients sometimes.

Anyway I digress, it’s been such a relief to get back to card making after the trials and tribulations of the curtain linings last week. I finally managed to finish them though and while the sewing machine was still out I also made myself make the pelmet for my lounge which I’ve been meaning to do for the last eighteen months and also take the curtains up a smidgen because they’ve been dragging along the floor for the same length of time.
I’m so ashamed of myself for admitting that but they are done now and just waiting to go back up at the window so all in all so I should be feeling pretty happy.

If you want a better look at the cards I’ve made this week here they are:-

I was playing with my new set of Kanban stamps and some clear embossing for this first one. 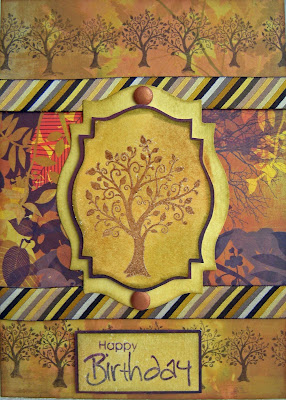 Next is another stamped and embossed image but I can’t remember who it’s by because it’s not in any packaging. I’ve water coloured this one with Marvy LePlume pens and added some Crystal Lacquer to the tops of the waves for effect. 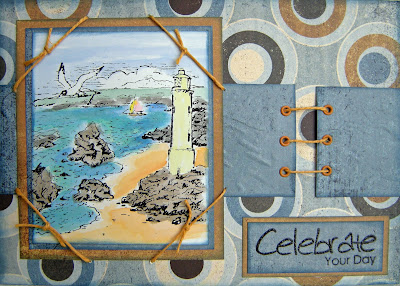 For the next two I’ve used a Sketching Stamper digital stamps and coloured them with ProMarkers. 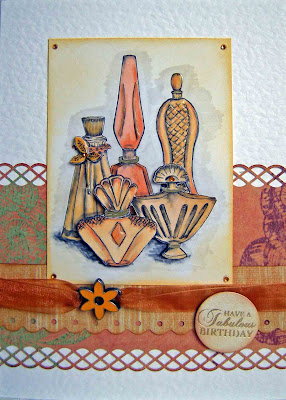 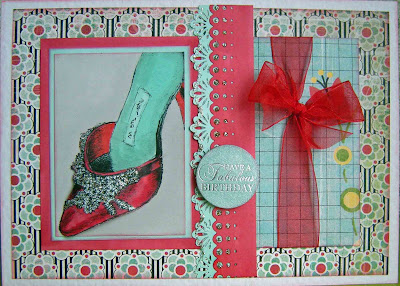 Then I thought I would have a go at making my own rosettes using my new 'Hougie' board. If you've not heard of one of those it's just a 12 x 12 scoring board marked out in 1/2cms on one side and 1/2inches on the other and it's the best piece of equipment that I've brought in ages. 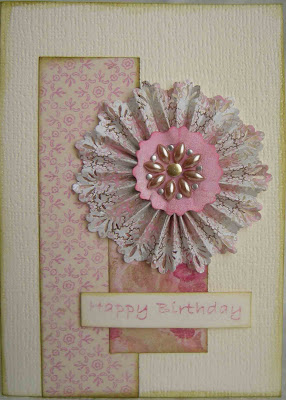 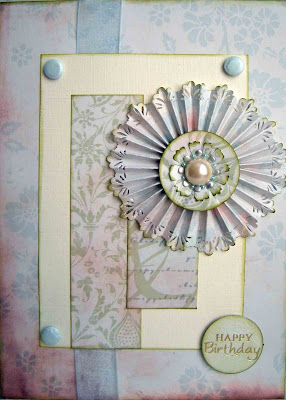 And the last but not least are a couple just using up some scraps that I had laying around. 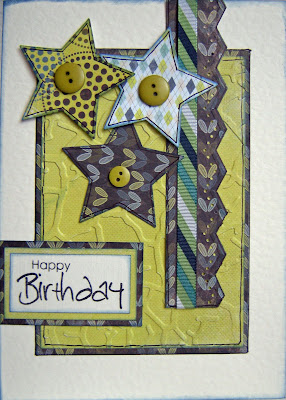 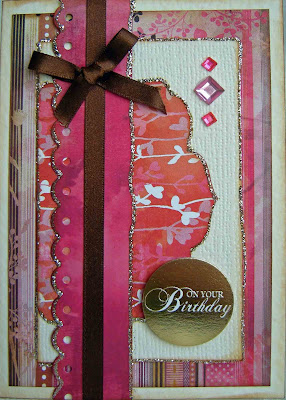 So that’s it from me for another week, I need to pace myself ready for the fun and games of next week’s WOYWW.

Look forward to seeing you all at the party, so until then………

For a little update us to why I’m not commenting on people’s blogs at the moment click here.
Blogger is being a pain
Posted by SueH at 11:49

Aww, bless, how can you resist that face? ;-) and wow, what a lot of cards, you have been busy
Hugs xx

Very pretty cards! I love seeing something a little different and these are really lovely.
TFS
Lisa-Jane #68

Thank you for sharing all those lovely projects with us. I love that seascape card, really summery.

wowee - lots and lots going on! Great designs - love the rich colours of the first one!
Thanks for sharing, have a great week.
Sarah at 18 (Sasa)

I am excited about next week, too. I am making something...just not sure what yet!!:)

Have a wonderful, wonderful and crafty day!!!!

Well done on getting your curtains finished, Sue and a pelmet!! I'm impressed.
Your cards are all great. I love those Kanban trees, I've been after that set for awhile.
Blimey, you've worried me now, a card to go with my pif, why didn't I think of that before. There's a job for tomorrow!!
Happy WOYWW
Hugs Lisax

beautiful cards! glad you love the Bougie Board :)

You said it about blogger!!
I love your cards - especially the trees on the first one.

great cards! love the shoe one and the one with stars!

what a beautiful cheeky looking cat!

Fabulous cards Sue, am especially impressed that you used up scraps while you were in the zone!
Don't be ahsamed to admit to long curtains - it's just the sort of job that is perfect for putting off...after all, it involves so many other jobs - taking down, unpicking, rehanging to check height, blah blah..I get it!