What's On Your Workdesk Wednesday #99

Good morning Workdesk Wednesdayer’s and what a fab morning it is.

Despite the weather forecast for rain, my little corner of the South East has so far missed it again and the sun is still shining here even if it’s not as warm as it was, so I’ve been making the most of it.

I’ve been out and about over the weekend visiting a sick cousin who’s been in hospital but is home now (Get well soon Ken) and also I was at a BBQ on Sunday with my very good friends Susan and Edd and my two God Daughters, which was lovely.

The consequence of that is that there’s been very little creativity going on because I haven’t really settled down to doing very much since.
I did come close yesterday though because I’ve finally decided that it’s time to sit down and do a scrapbook page of my dad.

I know it sounds silly but since losing him last August I just couldn’t face doing it for some reason, but now I ready and yesterday I started to sort out the papers and get everything together that I had brought to do it but I didn’t get very far.
I couldn’t find the old photos that I wanted to use and I spent the rest of the morning searching through drawers and cupboards looking for them.
I wouldn’t mind, they should be easy to see because all four of them are in quite big frames from when I had them hanging on the wall in my bedroom so they won’t have just been tucked away somewhere. All I can think is that they are still over at my brother’s house because we had them on show there after dad’s funeral.

Anyway, the long and the short of it is that after all that searching the page didn’t get done in the end and the papers and things are still on the corner of my desk waiting to be used. 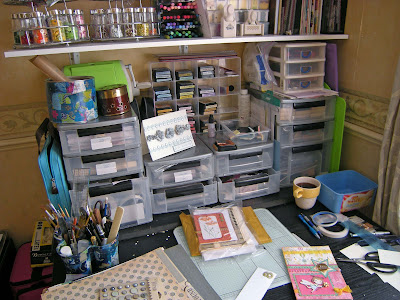 The only other things of interest on my desk are two cards, one of which you have seen before but is having a bit of a tweak.

I made the Fairy card a couple of weeks ago as part of a five card order and had them all packed up and ready to post when I received a reply to an email I sent last week asking if she wanted an age on the front of the card. When I didn’t hear anything back I assumed that she didn’t and packed everything up but it turned out she was waiting for a reply from Australia because she was checking the age, so this morning I’m just adding the ‘8’ to the front and then will post them as I go out.

The other card is for a wedding and is my first attempt at making crinkled paper flowers using Mr. Holtz tattered flowers. I love the way they turned out and they were so easy to make so you can expect to see loads more in the coming weeks.

So that’s about it from me, I’m off now to drink that cold cup of coffee you can see on my desk then get that card finished.

Don’t forget to drop by The Stamping Ground where Julia has the list of everyone who’s joining in this week and visit a few blogs.

I think you will find scrapping your Dad very theraputic. Nothing is as frustrating as knowing that a photo exists and not being able to find it.
Love the flowers btw.xx

I am not very good at card making but I LOVE receiving a handmade card!! Nice desk...and I hope you can create soon!!!

i love the cuttlebug, how do you get on with yours, I have the pink one. lots of lovely goodies there, Happy WOYWW 99, Thank you for sharing your desk with us much appreciated it. A great desk. #31.

Lovely cards there Sue. I am sure that when you find your pictures, the layouts will be fantastic! Keep looking!
Thanks for your kind comments.
TFS

nice work space. Love the card. I think those little bottles of beads and buttons are awesome. A picture in themselves! LOve all the organization on your desk. Thanks for sharing. Vickie aka okienurse #35

I'm sure you will create wonderful LO's of your dad. Hope you can get to it soon.
happy woyww
rebecca (38) x

Thanks for already calling by and saying such nice things about my DCM first challenge/dare card. Hadn't realised you used to be on their DT. I hopped over to your other blog at first and just love the layouts there. I'm sure the one for your Dad will be every bit as good and made with lots of love. Those bottles of buttons etc. look very inspirational on your desk BTW! Di x

The weather has been fantastic hasn't it, Sue. I 'm glad you've been enjoying it.
If it's any consolation, I lost my Dad 8 years ago and I still haven't scrapped a photo of him, I think it's about time I did.
The tattered flowers are gorgeous aren't they and sooooo easy.
Have fun.
hugs Lisax

I believe it's quite normal that it took you some time to finally be ready and scrapbook about your Dad. I hope you will find those pictures of him that you were looking for.

Your desk looks fab as ever, Sue. Always good to have a nosey at what's going on - even when I'm not organised enough to join in!

Ooo, Sue I am incredibly late but oh how I hate looking for things like that too and hope and pray those pickies have turned up for you... happy belated WOYWW and TFS! Shaz in oz.x