It’s a while since I’ve set a dare for the Daring Cardmakers but my turn has come round at last and I’ve decided to link it to Post Pals,
a charity I’ve been involved with for several years.

They are an organisation that was set up with the intension of sending cards, letters and post cards to children who have long term or terminal illnesses and it’s not until you go to their web site and read the children’s profiles that you realise just how much these children and their siblings suffer.
It must be so stressful for the families.

That’s why, when I’m cardmaking I like to make an extra one now and again to send to one of the children. All it costs me is the price of a stamp but it could make the world of difference to a sick child who needs to know someone is sending them love and thinking about them.
Well worth doing if you ask me!
So as I say, my dare this week is to make a card with a sick child in mind and send it to one of the children featured on the Post Pals web site………..simple!
I’ve use a pre coloured Digi Stamp on this card because the colours were a perfect match for the Crate Paper ‘Orbit’ Collection papers that I’ve used…..how lazy was that! 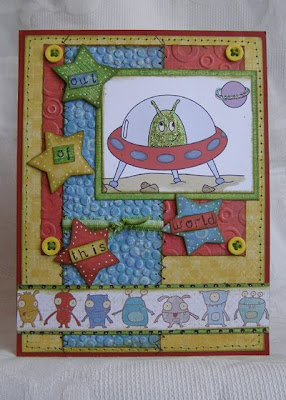 In my defence I did put a lot of extra work into the card to compensate, by adding lots of embossing, doodling and faux stitching. 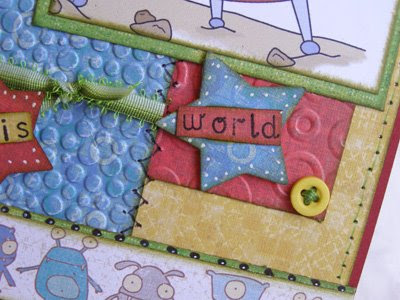 After I had made my card I had a read of some of the children’s stories.
It makes difficult reading, I can say and it also made it very hard to choose just one child to send a card to. In hindsight, what I should have done is looked at the list first and made the card accordingly but I struck lucky when I came across a little boy called Jordan who likes anything to do with outer space, so it was perfect.
Jordan also has a sister so I decided to send her a card too.
There's blog candy up from grabs too because anyone who makes and sends a card to one of the children at Post Pals can enter the draw onAnn's blog, so why not join in. Not only will you be bringing a smile to a childs face, it could put a big smile on yours if you're lucky enough to be picked!

Other BitsRibbon
Buttons
Green Embroidery Thread
Posted by SueH at 10:43

Not lazy - inspired! Love all the details on this card Sue!

Now this is so sweet!! I love your fun design and the beautiful details of it all!! TFS! :)

It certainly is well worth doing Sue - a great dare, and I love your card - lots going on and fab funky colours. :)

love all the little details, teh stitching ,the doodling ,the bright colours ,the embossing

OMGosh, Sue this is fabulous! I love the fun colors and textures!
It made me smile! An adorable card!
Great job!
Blessings, Maria

Gorgeous card - deffo not lazy, it is fab! A brilliant dare too this week :)

Awww. I think this is one of the cutest kid cards I've seen out there!